Until The QPOC Conference

The 6th Annual Queer People of Color Conference will feature speakers Kenyon Farrow and Ryka Aoki. They will also present workshops at the QPOC Conference, hosted by UC Riverside on April 8-10, 2011.

Kenyon Farrow is the Executive Director of Queers for Economic Justice—a New York City-based organization dedicated to community organizing, research, leadership development, and advocacy on issues that impact low-income and working-class queer and transgender communities. Kenyon was a Policy Institute Fellow at the National Gay and Lesbian Task Force, where he spent the year researching and writing on the impact of the HIV epidemic on Black gay men. He is working on a book based on this research. Kenyon is also the co-editor of three anthologies, “Letters from Young Activists: Today’s Rebels Speak Out” (Nation Books), “A New Queer Agenda” (a Queers for Economic Justice-produced e-book), and the forthcoming “Stand Up: The Politics of Racial Uplift“ (South End Press).

Ryka Aoki is a writer, performer, and educator who has been honored by the California State Senate for creating Trans/Giving, LA’s only art/performance series dedicated to trans*, genderqueer, and intersex artists. Ryka appears in the documentaries “Diagnosing Difference” and “Riot Acts” as well as the anthology Gender Outlaws: The Next Generation (Seal Press). She has work forthcoming in Transfeminist Perspectives (Temple University Press)

Ryka has performed in venues including the San Francisco Pride Main Stage, the Columbus National Gay and Lesbian Theatre Festival, the National Queer Arts Festival, Ladyfest South, LA Pride, Atlanta Pride, UCLA’s OutCRY, Santa Cruz Pride, and Emory University’s Pride Week. Ryka has recently spoken at UC Santa Barbara’s Pride Week, GenderFusions at Columbia College, UW Madison’s Trans Awareness Week, and UC Davis TransAction Week. Ryka has a fifth-degree black belt in Judo, and runs a self-defense/martial arts program at the Los Angeles Gay and Lesbian Center for at-risk queer youth. She has worked with the American Association of Hiroshima-Nagasaki A-Bomb Survivors, and two of her compositions were adopted by the group as its “Songs of Peace.” Ryka was also a charter member of the Transgender Advisory Board of Asian Pacific Islanders for Human Rights.

Ryka is a professor of English at Santa Monica College. She has as an MFA in Creative Writing from Cornell University and is the recipient of a University Award from the Academy of American Poets. Her chapbook, Sometimes Too Hot the Eye of Heaven Shines (Incognito Press) won the 2010 Eli Coppola Chapbook Contest. Ryka’s poetry is forthcoming in the 2011 edition of Many Mountains Moving, and Hummingbird Review.

QPOC Conference Registration will open later this month. College delegation registration will be $25 per campus (NOT per student). A High School track and Educator/Provider track will also be offered, in conjunction with GSA Network and Rainbow Pride Youth Alliance.

QPOCC
Riverside, California
Registration for the 2011 QPOC Conference will be $25 per campus.This fee is not per individual and we encourage schools to bring multiple students.
If you have any questions which have not been addressed in the F.A.Q.feel free to . 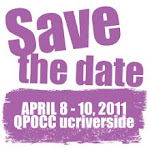